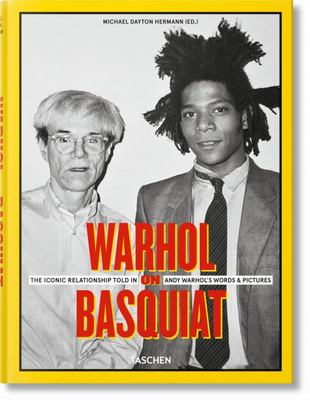 Portraits of the Artists Jean-Michel Basquiat by Andy Warhol Andy Warhol and Jean-Michel Basquiat's complex relationship captivated the art world then and now. At a time when Warhol was already world famous and the unofficial mayor of New York cool, Basquiat was a Downtown talent rising from the graffiti scene. Together, they forged an electrifying personal and professional partnership. At different ends of the avant-garde, the two artists inspired and adored each other, but such intensity inevitably sparked fierce rivalry, jealousy, and, ultimately, betrayal. As a prolific documentarian of his own world, Warhol the mentor extensively photographed his turbulent friendship with Basquiat, played against the backdrop of 1980s New York. Produced in collaboration with the Andy Warhol Foundation and Jean-Michel Basquiat's estate, this book chronicles the duo's short but monumental friendship in hundreds of never-before-seen photographs of Basquiat and friends. Entries from the legendary Andy Warhol Diaries complement the shots in Andy's deadpan prose and selected collaborative artworks. A moving introduction by Paige Powell, close friend of Warhol and Basquiat's girlfriend, offers a firsthand account of their flawed friendship. Warhol on Basquiat reveals an artist on the cusp of breakout fame--troubled, but talented and ambitious--and a touching, intimate glimpse into the personal lives of two of modern art's brightest stars. "He's afraid he's just going to be a flash in the pan and I told him not to worry. He wouldn't be." -- Andy Warhol on Basquiat, The Andy Warhol Diaries