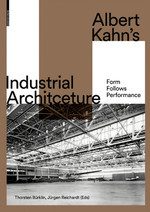 Albert Kahn is probably the most important industrial architect of the 20th century. With his factory for the Ford T models, designed for mass production, he found himself at the beginning of modern industrial architecture. His industrial buildings inspired the architects of European Modernism. They were the examples by which the structural rationality of Kahn's industrial developments became the guiding principle for the New Building movement up until today. The unrivalled monograph with its numerous photographs, plan layouts, site plans, and virtual 3D models comprehensively documents the buildings of Albert Kahn, which he was able to construct in a very short time due to his system-based working method - in the USA but also in the Soviet Union, Brazil, Sweden, France, China, Japan, and Australia.