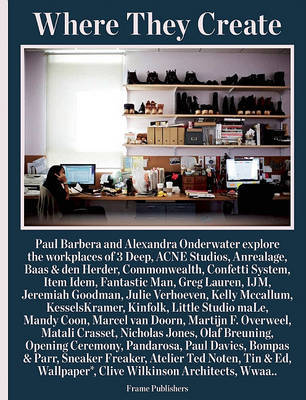 The successful weblog Where They Create documents studios where creativity takes place by showing the work of interior photographer Paul Barbera. Now it's time to make a book. "Where they Create" captures thirty studios from all around the world; studios of painters, sculptors, designers, architects, advertising agencies, and many others, some very well known, others only starting out. The studios of "Wallpaper*" magazine, Clive Wilkinson Architects, Jeremiah Goodman, and Opening Ceremony are included. Important to Barbera is that the photographed studios are somehow connected to someone Barbera knows and that he likes the creative space or the work they do.

"Where They Create" is also a break from the work Barbera does for several interior magazines, where everything is styled and considered. Instead the images for this book are as Barbera finds the spaces, un-styled and raw. Just the way they are. Each project is described with personal information from the owner of the studio and Barbera himself.

Alexandra Onderwater has written for many international magazines, including "Wallpaper*," " i-D," and "Frame."

Paul Barbera was born in Melbourne, Australia, but now works between Melbourne and Amsterdam, living in various locations that include Berlin, Prague, Singapore, and Rome. During this time, Paul established himself as an interiors and fashion photographer, working with publications like "View on Colour," "Bloom," and "Vogue Living."