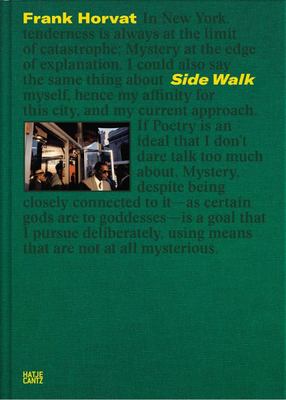 The legendary photojournalist's early '80s New York photographs, published alongside his autobiographical musings in an elegant clothbound editionFrom 1979 to 1986, the city of New York functioned as a kind of refuge for photographer Frank Horvat (born 1928). Born in present-day Croatia, for years Horvat lived and worked rather nomadically, traveling extensively through Asia and Europe on photojournalist excursions with a brief stopover in Paris where he shot fashion photography for Jardins de Mode and Elle. Eventually he found himself in New York; during this period, he allowed himself to surrender to the daily hustle and bustle of the city streets. In between commissions, Horvat created a prolific series of photography and writing that was not intended for public consumption, instead functioning as a reflection upon his own craft as well as the significance of photography itself. Frank Horvat: Side Walk publishes many of these photographs for the first time alongside the photographer's writing. The elegant presentation of this clothbound volume is representative of the great pride that Horvat took in the creation of his personal projects as well as his professional pursuits: the photojournalist's texts are published on thin Munken offset paper and his photographs are printed on deep matte photo paper. This publication is both a compelling depiction of a beloved city and a portrait of the sensitive man behind the camera.