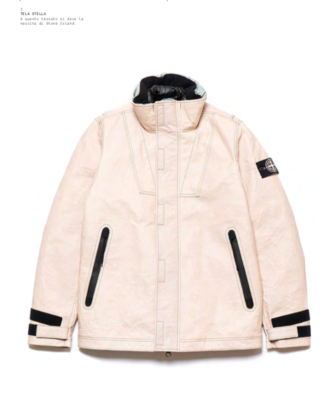 Founded in 1982 in Ravarino by noted menswear designer Massiomo Osti, Stone Island has a storied history famed for use of highly technical and innovative materials. At the heart of the brand lies a strong culture of experimentation and function, loose fitting, urban inspired pieces made of heat sensitive material, stunning iridescent fabrics, marked with the iconic Stone Island patch. A favourite of Spike Lee, Drake and the British boy-band One Direction, the brand has its broadest appeal in the football terraces of the English Premier League. Starting in the 1990s Stone Island parkas appeared on the stands at Stoke City, Blackburn, Motherwell and cities in the north, migrating ever south to the Midlands, and ultimately to London teams like Chelsea, Arsenal and Tottenham. Infamously worn by the likes of Pep Guardiola, the Manchester Guardian notes that the brand entered "into fashion folklore as a tough, working-class premium brand that could set you back a couple of months' wages for a single jacket." More recently, the brand has experienced an additional surge in popularity, garnering an explosive following in the rap, hip-hop scene, and grime scenes rocked by the likes of Travis Scott, Vince Staples, Skepta, Kano, and Boy Better Know. Cementing its place among the masters of contemporary cool, Stone Island has an ongoing collab with Supreme and recently dropped a collaboration with Nike. This is the first book published on the complete history of the brand, from inception to modern day. Straight from the Stone Island archives, this volume is filled with stunning, never before seen images and texts, this book also takes a deep dive into the technical processes that this brand is known for.